Auxiliary – A sailboat’s engine, or a sailboat with an engine
Ballast – The weight in a sailboat’s keel, sometimes in a centerboard, that

helps keep the boat from heeling too much 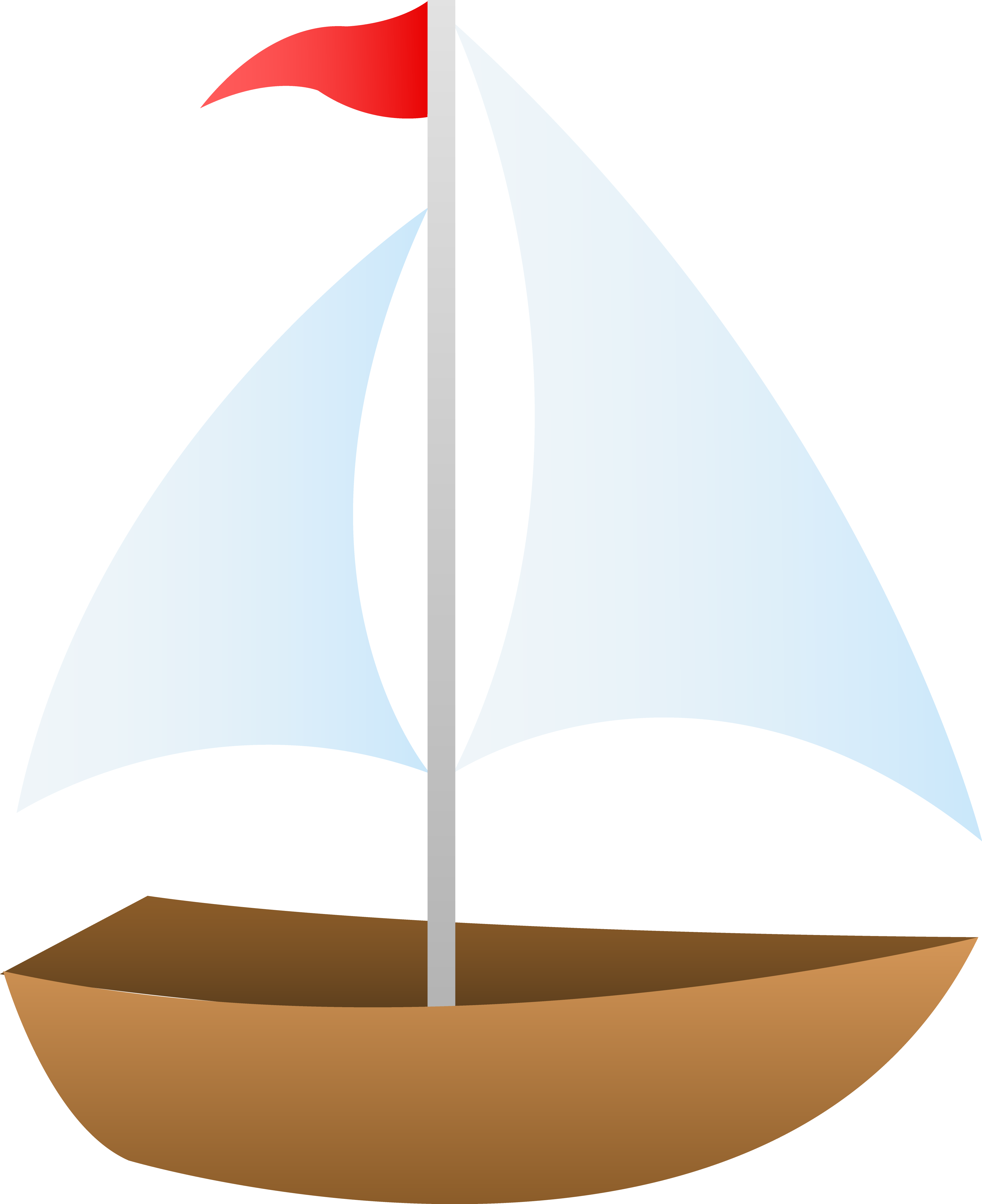 Beam – The width of the boat at its widest point
Bitter end – The free end of a line
Block – A pulley-like device used on a boat, with a sheave around which a line runs
Bow – The front section of the boat
Centerboard – A thin keel-like structure that can be raised (usually rotated on a hinge up into a centerboard trunk in the hull); present on many sailboats without a fixed keel to prevent the boat from being blown sideways; see photo here of the top of a small boat centerboard
Chock – A type of fairlead fitting through which an anchor rode or dock line passes, to reduce chafing
Cleat – A fitting around which a line is secured
Companionway – The entrance area and steps from the cockpit into a sailboat’s cabin
Daggerboard – Like a centerboard, but raised and lowered vertically instead of rotating on a hinge
Displacement – The weight of a boat, equal to the weight of water the boat displaces
Dodger – A spray shield at the front of the cockpit, this will usually be out of fabric, foldable or removable
Draft – The distance from a boat’s waterline to the lowest part of its keel
Fender – A bumper hung alongside to prevent the hull from rubbing against a dock or other structure
Forward – Toward the bow
Freeboard – The height of the deck above the water (the topsides section of the hull)
Gate – An opening in the lifelines for boarding the boat; also called gangway
Ground tackle – Collective term for a boat’s anchor and anchor rode
Gunwale – the outer edge of the boat’s deck and cockpit; also called the rail or gunnel
Head – The bathroom of a boat; also the top corner of a sail
Helm – The means by which the sailboat is steered: the tiller or wheel
Jackline – A line, strap, or wire secured over the deck as an attachment point for the tether of a safety harness
Keel – The lower section of a sailboat’s hull that counteracts sideways movement and typically contains ballast which is permanent more often then not
Lanyard – A short cord or line, often used to secure a piece of gear (such as knife, whistle, etc.) that might be dropped
Lifeline – A line or wire, often vinyl coated, all around the boat, held up with stanchions to prevent falling overboard
Line – Any piece of rope used on a boat
Padeye – Usually a metal fitting with a loop or hoop to which other gear is attached
Pendant (sometimes pennant) – A short line attaching the bow of a boat to a mooring, or a short wire attached to a sail or halyard as an extension
PFD – Personal flotation device, such as a life jacket or inflatable
Port – The left side of the boat (when facing forward); opposite of starboard
Pulpit – Usually a stainless steel, rail around the bow or stern typically at the height of the lifelines
Rail – the outer edge of the boat’s deck and cockpit; also called the gunwale
Rode – The line or chain between an anchor and the boat
Roller furler – A device by which a sail is rolled up, such as the jib rolling around a rotating forestay fitting
Rudder – An appendage below or on the boat’s stern that is rotated (by moving the tiller or wheel) to steer the boat
Safety harness – Personal gear (a separate harness or may be built into a PFD) that attaches to a tether to keep the person on board
Seacock – A valve fitting for closing an opening through the boat’s hull (drains, water pipes, etc.)
Shackle – A (usually metal) fitting that secures two things together, such as a halyard shackle connecting to a sail
Sole – The floor of the cockpit or cabin
Stanchions – Short metal poles around the boat’s perimeter that support the lifelines
Starboard – The right side of the boat (when facing forward); opposite of port
Tether – A short line or strap that runs between a safety harness and a point of attachment on the boat, to prevent going overboard; see photo here
Tiller – A long handle connected to the rudder or rudder post on many sailboats for steering; see photo here of one type of tiller
Topsides – The area of outer hull above the waterline
Winch – A drum-like device used to pull in lines under strain (halyards, sheets)
Windless – A heavy winch used with the anchor rode